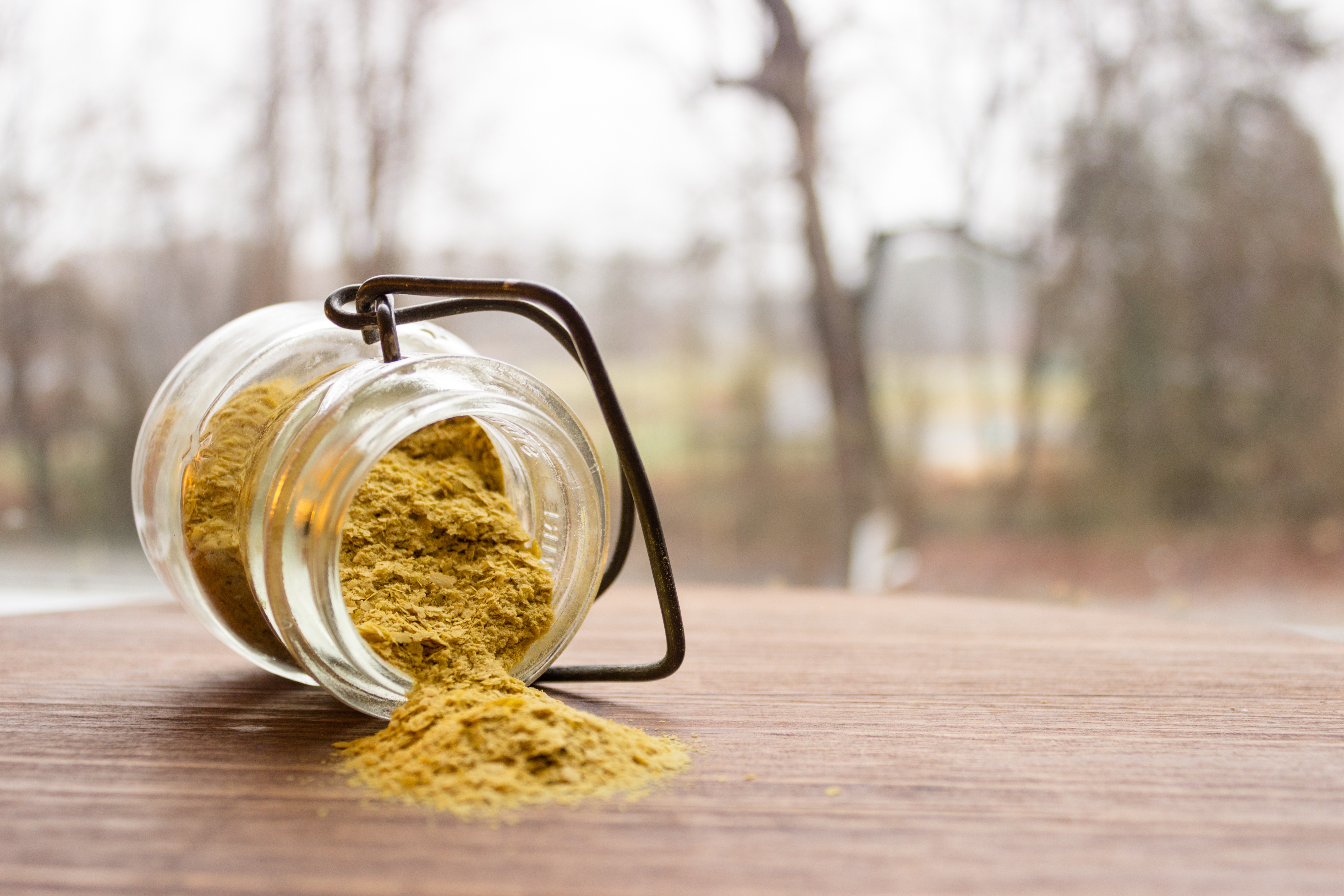 You are here: Home / nutrition / Foods you aren’t eating, but should: part III Holiday season is now in full swing and I hope you thought about my earlier post .  In the spirit of gathering, the food is the fire around which we flock.  Don’t fear the food!

I bring to you the third installment of Foods You aren’t Eating, but Should. Click here and here for parts I and II. Maybe during these colder months, you can take the opportunity indoors to experiment in the kitchen a little and get to know these delightful ingredients.  Instead of freighting about weight gain, or weight loss, think about nourishing your bod.

This is a weird one but nutritional yeast is fortunately gaining some much deserved recognition as of late.   People still give me a weird look when I mention this cheezy, umami wonder.  So, what is it?  Nutritional yeast, affectionately known by many as “nooch,” is actually an inactive, cultured strain of saccharomyces cerevisiae yeast and you can find it both in flake and powder form.  Vintners and brew masters love saccharomyces cerevisiae yeast because it is a key fermentation component for their liquid libation creation.

Don’t let the word “yeast” freak you out. Nutritional yeast is usually grown on molasses and is then deactivated during the drying process.  After the application of heat, what’s left is yellow flakes or powder than imparts a cheesey, nutty flavor to any food.  It won’t make your bread rise or guts bubble.  The unique, savory qualities of nooch make it popular among those following a vegan diet because it mimics the flavor of cheese, minus the saturated fat and lactose.  Everything in life is better with cheese.  But if you can’t/won’t/prefer to not eat it, then you can rephrase: everything in life is better with nooch.

Nutritional yeast is not only tasty, it is a powerful source of vitamin B12, which is usually only found in animal products.  Egg yolks are rich in B12 so if you eat eggs, eat the yolk!  Otherwise,  nutritional yeast is a key component to a healthy, balanced, animal-free diet. Other B vitamins are also found in this yellow stuff; riboflavin, thiamine, niacin, and folic acid.  In fact, just one tablespoon provides nearly 30% of your daily requirement for these vitamins, while only costing you 20 calories!  Chyeah.

B12 is also known as colbalamin and is a water-soluble vitamin that is essential for keeping our brains and nervous systems happy.  It also helps with the formation of blood, making it especially important for pre-menopausal women.  The metabolism of literally every cell in the body relies on vitamin B12, including DNA synthesis, and fatty acid and amino acid metabolism.  If that isn’t enough for you, this mighty vitamin can also keep you energized and feeling chipper.  Studies have shown that those suffering from chronic depression are often deficient in B12.

I really, REALLY love nutritional yeast so I have no problem including it in my diet.  Sprinkle some on plain popcorn, add it to mustard, sprinkle on eggs, or, my favorite, use it to make a healthy, guilt-free, pile of macaroni and cheese.   Side note- I do not follow a vegan diet but while I love mac n’ cheese, my guts don’t.  I found an amazing alternative by Oh She Glows.  Find it here. My husband even loves this cheezy sauce.  We often sprinkle a bit of Gorgonzola on top of the previously-vegan-mac, because, well, it’s awesome.  This sauce is also killer on broccoli. Bundles of fresh rosemary always remind me of when I was in Granada, Spain.  “Beware of the gypsies and their rosemary” was the first bit of advice I got upon arrival.  Gypsies float among the tourists offering sprigs of rosemary as a “gift” and once they force it into your palm, they will proceed to do a palm reading and will not let go until you pay up. Creepy to say the least.  In attempts to be politically correct, I have to say that not all gypsies take part in this type of scam.

Rosemary also reminds me of fall and winter.  I was just in Home Depot the other day and was pleasantly greeted by dozens of live rosemary wreaths and “Christmas trees.”  They were incredibly fragrant and familiar.

You might wonder why this common ingredient is on the list.  While dried rosemary is found in those spice mixes (Mrs. Dash etc.), people usually don’t use the fresh stuff.  Aside from violating their turkey or chicken with the fresh sprigs, rosemary is commonly overlooked.  It’s a brilliant aromatic for sauces and broths and is a sophisticated touch to homemade focaccia.

Here are the benefits of rosemary.  A sprig of this plant can help your immune system, blood circulation, and digestion.  Because it acts as an anti-inflammatory, studies suggest rosemary to be beneficial for those with asthma.  Rosemary is also rich in vitamin A, folate, and even calcium and potassium.  In fact, studies suggest that because rosemary improves blood circulation to your dome, it may even improve your concentration.

Fresh or dried, you can’t go wrong with this little evergreen.  Add it to omelettes, chicken, and sauces.  Instead of butter, try blending a bit of fresh rosemary with olive oil for dipping crusty bread.  You can learn more about rosemary essential oil here. Soy has become so controversial.  At first, it was the touted as the best alternative to meat (in the US, that is). Lower cholesterol, decreased risk of coronary heart disease, bio-available calcium, and cancer-fighting isoflavones are just among the many benefits of including soy into your diet.  On the other hand, soy is shunned because, as my husband puts it, men are afraid of growing boobs.  Soy has been shown to affect estrogen levels, hence the moobs.   Also, soybeans happen to be one of, if not the top GMO crop on the planet.  Soy is found in literally all processed products, which makes it big business.

So it looks like soy can be both good and bad.  How do you enjoy the benefits while avoiding the not-so-great stuff?  Tempeh, my friend.  More specifically, fermented soybeans.  Rich in manganese, copper, fiber, protein, phosphorus, vitamin B12, vitamin K, folate, and magnesium, tempeh just may be the ultimate protein source for veg-heads and carnivores alike.  The fermentation process makes the protein and dietary nutrients in tempeh more easily absorbed and utilized by our bodies.

The phytonutrient profile of tempeh is ridiculously awesome.  Borrowed from my friends over at WHFoods, here is the list:

All these will help fight cancer-causing free-radicals and basically help you age more gracefully.

Another important note for my paleo friends.  Soy, a legume, does contain phytates.  The problem with phytates is that they can inhibit the absorption of other important nutrients.  Fortunately, the fermentation process to produce tempeh (a whole food), greatly decreases phytic activity.

I like to marinate slices of tempeh in balsamic vinegar, olive oil, salt, pepper, Dijon, and loads of herbs before lightly grilling it.  You can find one of my tempeh sandwich recipes in the latest Greatist cookbook!   I am SO EXCITED about the release of this book and I appreciate your support. It packed with easy, healthy, quick recipes that are great for any weeknight. Sorghum is a whole grain, but wait, before you brush if off because you are “gluten-free,” rest assured that this special little tribe grass has been determined safe for people with celiac.   After conducting extensive laboratory tests, researchers in Italy fed sorghum to volunteers with celiac for five days.  Nothing bad happened.  In fact, sorghum flour is gaining popularity as a wheat flour alternative.  Sorghum is a fantastic, easily digestible, whole food that I bet you haven’t even heard of.

Sorghum contains 3-Deoxyanthoxyanin compounds, which have been shown to slow cancerous tumor growth.  Unlike wheat, oat bran, and rice,  certain varieties of sorghum have impressive phenolic and anti-oxidant components.  This is important because it helps to inhibit protein glycation and therefore reduce advanced glycation end products (AGEs).  Huh? Basically, there is a link between high AGE levels and diabetes, renal failure, and rapid aging.  Sorghum may help prevent the production of AGEs, maintain insulin levels, and slow the aging process.  Who doesn’t want that?

A staple food in Africa, this grain is a great source of fiber, iron, protein, policosanols (protect your heart), and anti-oxidants.  Culinary uses for sorghum almost always include all the germ layers, allowing our bodies to benefit from its full nutrient potential.

Make sure to stick to non-GMO brands.  Monsanto claims that genetically modifying sorghum enhances its nutrient bio availability for humans,  yet this crop has undergone over 5,000 years of natural evolution, during which humans have been eating it.  In truth, Monsanto modifies sorghum because it is so effective at warding off weeds, that other crops struggle to grow in soil where sorghum once grew.  Sorghum is modified to decrease its natural resistance.  If one of these mutant varieties cross-breeds with wild sorghum, it could have serious implications.

Sorghum can be enjoyed as a pilaf or porridge (1 part dry sorghum to about 3 parts liquid) and, when ground into flour, it can be used in pizza dough, bread, and more.  You can even pop sorghum, just like popcorn.  You can see my favorite way to prepare popcorn here.

There you have it! Just a few more foods to think about.

Regarding the recent cookbook I’ve been featured in for Greatist, I would love for you all to check it out!  It has 100 healthy recipes from some of the best food bloggers around.  Right now, I believe the price is $24.95 but there should be a holiday sale coming up.  As a contributor, I make a portion of all sales that are directed through my site.  Your support means the world to me and know that any money I earn will go towards making SoulBeet even better.  Find it here and if you try any of the recipes, let me know! Post a pic on Instagram, hashtag #soulbeet, or shout out on Twitter @soul_beet.