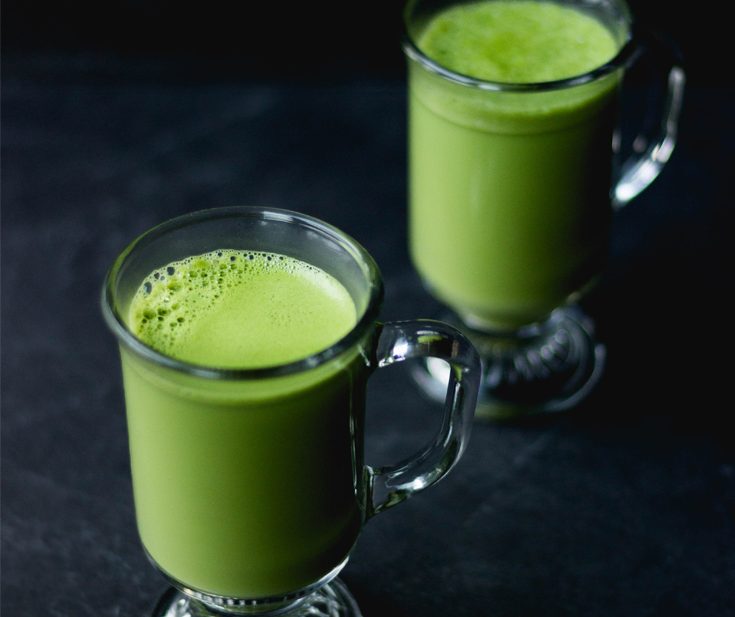 Update! My matcha maca latte has remained one of my more visited recipes so I thought it was time to give it a little update. I’ve tweaked the recipe a bit and made it even better 😉

I want to preface this post: I love coffee. Each morning, I look forward to my cup o’ jo, brimming with coconut oil and black liquid goodness. I don’t rely on coffee to get me moving, however, I just simply enjoy the taste and feeling I get while drinking it (ok, maybe I do like the caffeine perk).

Viewing coffee consumption from a health standpoint sparks much debate and conflicting evidence. Among the varying opinions, there are some facts that cannot be argued. The caffeine in coffee will certainly give you energy, mental focus, and may help you burn fat. Because coffee is brewed from a bean, the resulting cup contains riboflavin, pantothenic acid, manganese, potassium, magnesium, and niacin.

Coffee is also loaded with antioxidants, and we all know those are good. Some experts argue that all these benefits are cancelled out when considering the diuretic and stimulant (read: cortisol spiking) side effects of coffee consumption. Adding sugary flavored syrups, whipped cream, chocolate and caramel syrup to the ever popular designer drink does, without a doubt, leech any benefit from the coffee itself. Enjoyed in moderation, without added sugar, and sourced responsibly, I am able to savor my morning cup. But! If I suspect I have some hormonal imbalance going one, coffee if one of the first things to go.

Now, as with many other wonderful things, it is hard to stop after just one cup. We run into trouble when we find ourselves downing the entire pot of coffee ourselves and relying on it as an afternoon pick-me-up. Too much caffeine can cause anxiety, agitation, GI upset, dehydration, and insomnia. I, for one, have certainly been guilty of sipping coffee all day long in the past. I came to believe that my caffeine tolerance was sky high because I was able to drink two cups and take a nap. Oye. Since then, I enjoy my drink sensibly and regularly swap my jo for something a little less stimulating and a little more fabulous. My matcha maca latte. It has long been accepted that green tea has an impressive polyphenol, antioxidant, and flavonoid content. The catechin Epigallocatechin gallate (EGCG ) has brought fame to green tea and its extract has become a popular supplement. Multiple diseases are believed to be impacted by ingesting EGCG. Studies have suggested there to be a cancer preventative effect from drinking green tea. Problem is, you need to drink 10+ cups a day to get anywhere near the amount that is suggested to have a therapeutic effect.

Matcha is a Japanese type of green tea made from high quality shade grown green tea leaves. The leaves have undergone a special process which results in minimal oxidation, therefore preserving their potent antioxidant power. The leaves are essentially ground into a very fine powder that, when whisked with hot water or milk, creates a creamy, silky tea drink. Unlike steeped tea where the leaves are discarded, matcha tea actually involves ingesting the finely ground leaves. Because of this, the EGCG and antioxidant power of matcha is over three times that of regular steeped green tea.

We know that blueberries have lots of antioxidants but to put it in perspective, matcha, by weight, has dozens more antioxidants than blueberries (> 1000mmol/100g vs. 9mmol/100g, respectively). Matcha also has a bit of caffeine, just the right amount to be beneficial while giving you a boost.

Note- when purchasing matcha, be sure to look for the “ceremonial grade” as opposed to the “culinary grade.” It matters!

Maca root powder, hailing from the Andes Mountains of Peru, has long been recognized by indigenous Andean societies for its healing and nutritive powers. You can find it in both raw and gelatinized (still a powder) form. Some argue that raw is the way to go but it is also known that raw maca root can make people violently ill. Because of this, I can’t in good conscience recommend the raw version. The gelatinized maca has undergone a process in which the starch has been removed, therefore making it more easily digestible and eliminating the risk of stomach upset.

Maca has been found to have a hormone balancing effect in both men and women. (It may even make you a little randy!) Sustained energy without the jitters or crash, reduced stress, and mental clarity have been said to result from the hormone balancing effect of gelatinized maca. In addition to making your hormones happy, maca also contains impressive amounts of amino acids, essential minerals, fiber, alkaloids, plant sterols, phytonutrients, vitamins, and fatty acids. Oh, and it has a subtle butterscotch flavor. Everyone wins. 
This is a great alternative for those wishing to cut back on their coffee habit. Because it has some caffeine, it will prevent the withdrawal headaches associated with kicking the habit, while still providing sustained energy. The monks were certainly on to something with this stuff.

*Matcha powder is not cheap. I order mine online and because a little goes a long way, it will last a really long time, if stored properly (air tight, away from light).